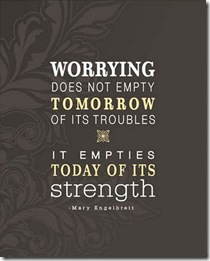 Images via and via

What does it say about me that I have multiple quotes about worry pinned on Pinterest? Oh right, that I’m a mom. All this talk about not worrying is clearly for people who don’t have children. I try not to let worry consume or overwhelm me and in general (except for when I was pregnant and hormonal) I think I do a pretty good job.

That said, I’ve been doing a lot of worrying lately about Lorelai and her allergies. I was told not to google ‘peanut allergy’ willy-nilly because there’s a lot of misinformation out there (surprise! I haven't...yet). The doctor directed me to http://www.foodallergy.org/ for reputable information on allergies. I started there, and what do I see on the home page? “Latest News: Fatality in Chesterfield, VA Reported.”

Rationally I know that food allergy fatalities are very rare. Adam pointed out that there’s a better chance of dying in a car accident (which doesn’t help much because now I just feel worse about cars, obvs). But it’s just one extra thing we have to worry about with Lorelai that we don’t with the boys. And not even just dying. Almost dying from anaphylaxis is enough to put me over the edge with worry.

I don't want Lorelai to have to worry or be scared either. She's obviously too young to know what's going on now, but as she gets older this will be a huge burden on her. I don't want that for her. I want her biggest worry to be what shoes to wear.


I’m eagerly awaiting the results of the blood test with the hope that it’ll lesson some of my concerns if her levels are low. But since there’s no way to know what her reaction will be and to what amount, I think I’ll just be in a constant state of worry, pretty much just waiting for something bad to happen. Not a good way to live, and it'll get me nowhere. Rock, rock, rock... 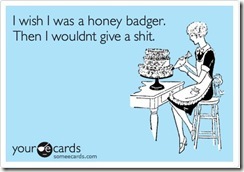 Pardon the language (mom). If you’re not offended by such language, do yourself a favor and watch this hilarious video about the honey badger. Just not around kids or anyone who would be offended by bad language :)
Posted by beckyj @ A Lazy Crazy Life at 8:01 PM