Party at my crib

Lorelai has always been such a good sleeper (knock on wood) that we've been completely spoiled. Ever since she started sleeping through the night at about 8 weeks old, she rarely wakes up in the middle of the night and even if she does, Adam and I have only had to go in to soothe her back to sleep less than a handful of times, and never once we were both already asleep. That is, until the other night.

I'm not sure what was going on with her, but she woke up at 2am ready to party, and "mamamamamama" was cordially invited. (On the plus side, she's mastered the "mamamama" babble—music to my ears!) She wasn't upset at all, so I waited to see if she'd go back to sleep on her own. No such luck. I got up and tried giving her a paci. That worked for about 5 minutes until she spit it out so she could keep calling "mamamama" back in to play. I could hear her getting frustrated because no one was coming to get her, so I got up again and tried to rock her back to sleep. No such luck with that, either. She wasn't getting sleepy at all (but I was!) so I just brought her back to bed with me so I could nurse her back to sleep. To my utter shock, that didn't work either. She finished eating and just laid in bed with me clapping and smiling. I couldn't even be mad because she was just so frickin' cute and happy. 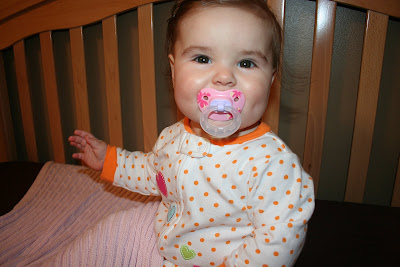 Finally, 2 HOURS later, she was asleep, so I put her back in her crib and crossed my fingers for a late wake up. Yep, no such luck. She was up again at 6am. I put her paci in and tried to get some more sleep, but that only lasted about 20 minutes before I brought her back into bed with me. I love my snuggle time with her, but I'd strongly prefer it not be in the middle of the night or at the butt crack of dawn.

It's also worth mentioning that Adam had NO idea any of this happened. He didn't hear her talking (loudly!) in her crib, and he didn't even hear her when she was babbling and clapping in bed next to him. Is that a typical guy thing, or what?! It's ok, dadadada wasn't invited to the party anyway, but you'd better believe that I'm going to extend the invitation to him (in the form of a kick in the butt) if it happens again ;)

Email ThisBlogThis!Share to TwitterShare to FacebookShare to Pinterest
Labels: Lorelai