Justice did not prevail

I have a heavy heart and I'm seriously ashamed of my state right now. The marriage amendment passed and discrimination was written into our constitution, beyond all sense and reason. Is it not in direct defiance of the 14th amendment where "No State shall make or enforce any law which shall abridge the privileges or immunities of citizens of the United States; nor shall any State deprive any person of life, liberty, or property, without due process of law; nor deny to any person within its jurisdiction the equal protection of the laws"?

Haven't we learned our lesson by now after Jim Crow laws and the ban on interracial marriages? How is this even being debated in 2012?

As saddened as I am about the passage of the marriage amendment, I'm proud to be surrounded by so many like-minded friends and neighbors who are up in arms about its passage. In my neighborhood, I haven't seen a single sign supporting the amendment, and I haven't seen a single Facebook friend post openly in support of it. I'm also extremely proud of my county which was one of only 7 counties (out of 100) that voted against, and with a whopping 70% majority at that.

I signed the change.org petition and although it'll be a hard fight that should have never have had to happen in the first place, I'm hopeful that change will come before my children are old enough to be affected in any way by this serious injustice, and before anyone can convince them that discrimination is ever okay.

When they grow up and look back on this historical injustice, which will hopefully just be an ugly bump in the road to full equality, I hope they'll be proud that Adam and I stood on the side of justice and equality for all.

One of my Facebook friends, Mike Frost, posted this eloquent statement, and I wholeheartedly agree with his words:

"I am a North Carolinian. I represent and respect a diversity of the people of my state regards of their gender, race, religion, nationality, an especially, their orientation. I stand up for the rights and freedoms of those who are oppressed and marginalized for their differences.

I do not let the voices of the majority who would seek to restrict the rights and freedoms of a minority speak for me; I speak with my own voice because it is my personal freedom and civic duty to do so. With that voice I say this:

While I respect the outcome of the vote on Amendment One, I reject what it says about me and the others who voted against it along with me. Neither I nor the people who voted against this are bigoted and ignorant. We are sad, embarrassed, and full of regret that we couldn't do more to prevent its passage.

We are also loving, caring, and welcoming, and we welcome and respect the diversity that everyone of different backgrounds brings to enrich our beautiful state. From the mountains to the sea, you will not find a more beautiful nor diverse place in this nation to call home - nor will you find a more committed group of people seeking to fight for the rights of those who are downtrodden and disrespected.

I encourage everyone who feels the same to sign this petition and continue to fight for justice and equality for all citizens in whatever way you can. 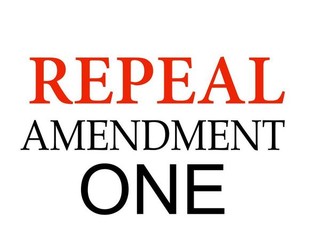