I don't like confrontation. I'm a shy person, so I'm just not good at it. Maybe I'm a pushover, but I really do try to avoid confrontation whenever possible. But sometimes it's unavoidable.

Many of you probably already know that we had an incident with Aidan at school this week. His teacher ripped up and threw away his school work because he wasn't doing it the right way. It made Aidan cry in class (even though he told me he tried to hold it in, bless his heart), and he cried about it again when he told me and Adam about it that night. My heart broke for him. I was angry for him and upset that he was embarrassed and disrespected in that way.

At the same time, I got a sick feeling in the pit of my stomach because I knew Aidan was hurt and I knew I had to do something about it. I was anxious. Nervous. But I needed to stand up for Aidan and be his advocate because that's my job. When it comes to my kids, I have to fight to make things right for them until they can do it for themselves.

Unfortunately, this is a tricky situation. Several people (including Adam) thought I should go straight to the principal. Part of me agreed, because I just can't see any explanation that would excuse or justify what she did. But whether I like it or not, she's his teacher for the rest of the school year, so I decided that it's not in Aidan's best interest to make a big stink and piss her off. I wouldn't want to do anything to cause her to like him even less (we've had several indications that he's not one of her favorite students and they just don't mesh well) or cause her to not provide the level of teaching he deserves.

I was actually already going to be at school that next day for lunch with Aidan. He was "celebrity of the week" and one of his privileges was for me to have lunch with him. So I took that opportunity to speak with his teacher (just me and her, Aidan had already left the room), and I think I handled things pretty well. I just told her that I was concerned because Aidan came home really upset the day before, because he said she tore up and threw away his paper and asked her what happened.

She said she did, and explained that it was because he wasn't doing his work the right way and she said she'd been over how to do it with the class "several, several" times before (although Aidan later told me that he thought she must have gone over it while he was out sick for two days the week before because he hadn't heard the instruction more than a couple of times). She said she doesn't tolerate students doing it the wrong way because she said they all should have known how to do it, so she tore his paper up and threw it away. Apparently it's some complicated process (she fully admitted it was complicated and involved) for learning words where you have to write a word down, cover it up, read it, then re-write it. I honestly don't understand how he was doing it wrong, but she said she wouldn't have had to throw it away if he had just asked for help in the first place. Unfortunately, as he told me that night, he didn't know he was doing it wrong until she ripped it up, so he didn't know to ask, which I told her.

I also pointed out that Aidan said he was the only one who has ever gotten his paper torn up, and she didn't disagree. So it's not standard procedure for her (which still wouldn't be acceptable, but if that was the case, then at least Aidan wouldn't have been singled out like he was). I clarified with her that he wasn't cheating or anything, and then said I was very upset about it, that I didn't think that was an appropriate way to handle it because I felt it was disrespectful to the effort he was putting in. She said she was sorry, but she kept pointing out that he should have known how to do it and should have been doing it the right way. It was almost as if she was blaming him.

I kind of wish she was more remorseful and admitted she was wrong to do it, but at least I was able to call her on it and stick up for him (in a tactful way), so hopefully it doesn't happen again. I told her I didn't want anything to cause him to like school any less (which is what we had a conference about last month).

I talked to him afterwards and made sure he knows to ask her ASAP if he's not sure how to do something, and to let me know if she does it again. Adam did say that if there are any more incidents, we're going straight to the principal, but I'm glad I handled it this way this time.

It's just too soon for Aidan to start disliking school, so I want to do anything I can to prevent it! Here he is on the first day of 1st grade, so excited! I want him to be this excited for school every day for years to come. That's totally realistic, right?!?! :) 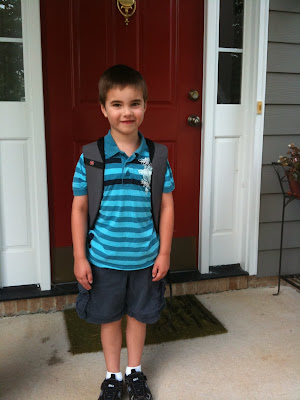 Email ThisBlogThis!Share to TwitterShare to FacebookShare to Pinterest
Labels: Aidan