Whoa, 6 months is half a year!‏

You know what they say, time flies when you're having fun! I can't believe Lorelai is 6 months old today. That's half a year (ya like my math skillz?)! I can honestly say I've loved every minute of it (ok, maybe not every minute, but every hour, on average:)). She truly is an awesome baby. Very happy and very easy. I'd also like to think that after having done this newborn thing twice before, I'm more laid back and experienced, which makes things go more smoothly. Or maybe it's just that I've got much more realistic expectations than I did the first time around. Or I'm giving my parenting skills too much credit, and all I did was give birth to a perfect baby. Wait, in that case, I'm not giving myself (or Adam) enough credit! :)

Knock on wood, she's also an amazing sleeper. Knock on wood. A lot. I'm hesitant to talk about how well she's sleeping for fear that I'll jinx it, but she's been sleeping through the night since about 8 weeks old. And not just the textbook definition of 6 hours. I'm talking down at 9pm until I wake her up at 7am. These days we're talking 7:30pm(ish) to 7am(ish), and sometimes later on the weekends when we don't have to get up early. This morning she was still sound asleep at 9am, so I had to wake her up! I was so worried that my luck was up after having two good sleepers already, so I can't believe I was blessed a third time. Knock on wood.

I admit, I do nurse her to sleep (I know, I know, go ahead and cringe because "they" say you're not supposed to), but it works for us, and I treasure that time with her every evening. And I don't think she necessarily needs it to go to sleep since she falls asleep on her own for naps. But we'll see what kind of monster I've created whenever she weans.

So what else is missy poo up to? She’s been rolling from back to tummy since she was 4 months old, although she doesn’t like to roll from her tummy to her back. In the last week, she's been sitting on her own. Her favorite babble right now is dadadadadada, and she also says "heeeeyyyy". No teeth yet, but I keep thinking any time now. She's been wanting her paci a lot more these days, and I think she may be biting on it as much as she's sucking on it because of teething. She was also a thumb-sucker for a little while, but not as much anymore. Maybe because it hurts to bite your own thumb.

She loves her brothers, her Sophie, being around people, and taking baths. She hates being alone (unless it’s bedtime or nap time). She'll cry if we walk out of her sight, but is happy as a clam when the boys are all up in her grill. Which they are. A lot. It's a totally mutual love.

And last, but not least, she had her first taste of solid foods this morning! We chose to start with avocado and she loved it! She's been exclusively breastfed up until now (with pumped bottles of milk at daycare), and she's definitely been showing an interest in our food. although I can’t say I was in any rush. I'm hesitant to do anything that could mess with the good sleep we've been having, but it's time.  I’m also going to make up a batch of sweet potatoes and squash this weekend that we can try later in the week.

Here she is, our beautiful 6 month old! 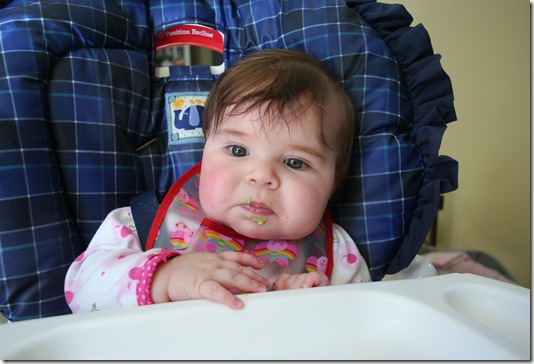 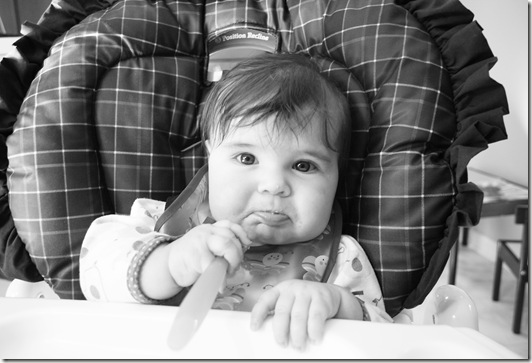 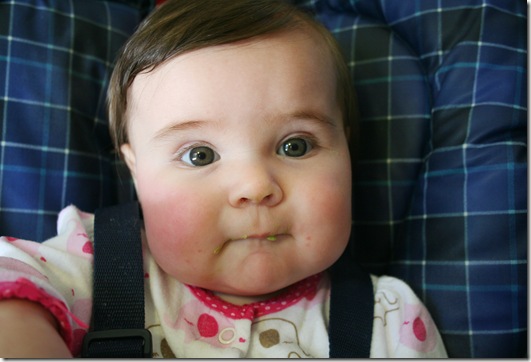 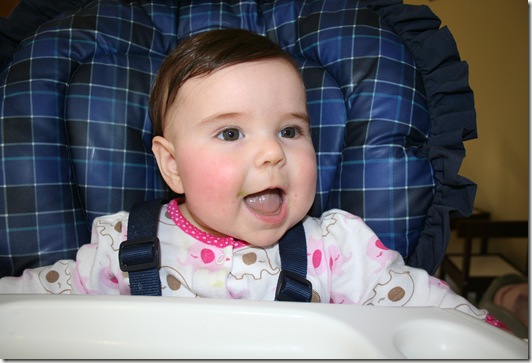 Email ThisBlogThis!Share to TwitterShare to FacebookShare to Pinterest
Labels: Lorelai